So being back in the UK and feeling the need to seek adventure and interesting things to do once more, I found myself on Time Out London, scrolling through all the “Things To Do This Weekend” links, however finding that a lot of the suggestions were becoming quite repetitive.

I was at work one day, and overheard one of the women in the office telling someone how she was leaving early, as she was having lunch in Brixton Prison.  Of course, everyone’s reactions, including my own, were “hold up, what?!” seeing as the department of Public Health and Islington Council, don’t really have anything to do with Brixton Prison.  Also, it’s not a usual thing to hear to be honest.  “Oh hey, I’m just going to grab some food at a high security establishment”.

So I had a quick Google and soon realised that this lunchtime at the prison deal was actually set up by a charity called The Clink.

The aim of The Clink is to reduce the number of reoffenders, by offering the prisoners a chance to work in a restaurant, and gain skills and qualifications within the hospitality industry, that can translate and be used upon release.

I thought to myself “great stuff, that’s unusual and something to do”.  So I applied online, giving it the large about why this is important to me, and got granted a place for two to have lunch.  Step in Julien.

On the day, we followed the signs to The Clink restaurant, put up around the side of the building.  We got to a white portacabin in the car park and waited there for about 15 minutes for someone to show up.  We also waited for the other diners who had signed up for lunch, as you go in at an allocated time together.  When everyone was finally there we went through security checks, which literally involved swapping our ID’s for a neck pass and then placing EVERYTHING in a locker, to ensure that we weren’t going to slip anything to the inmates.

This process took quite a while, as the man that worked there loved a good natter.  If I remember rightly his chat included comparing his ambivalence towards rain to his fondness of water skiing (??).

We walked to the big blue prison gate way and the door opened with a loud rumble.  I almost felt as though we were entering the Death Star.  Either that or Port Arthur.  But not nearly as badass.

We got taken across the courtyard and into a hexagon building in the middle, where as soon as the last guest was through the door, the bars were bolted up and in we were locked.  We went through to be greeted by a smiling lady in a trouser suit, who I can only presume was a prison officer. She asked us how many guests in each party, and then referred us to a prisoner in a blue jacket with “The Clink” emblazoned on the breast.

He sat us down at one of the many glass tables within the restaurant.  It was an odd experience as we sat looking around.  Everyone was being so overly polite, both the prisoners towards the guests and vice versa.  It unfortunately lacked the authenticity of what restaurant life would be like in the outside world, as I think I’m right in saying none of the diners wanted to piss off anyone working there.

We opened our menus, and were pleasantly surprised with the food that was on offer. We had a choice of 4 starters, ranging from soup of the day, to ham hock, and then a larger selection of mains including tea smoked duck breast and wild mushroom risotto.

There was every kind of beverage imaginable on offer, except, of course alcoholic ones. Not that I’m complaining…for once in my life.

I ordered the smoked mackerel pate, and Julien ordered the ham hock to start. For mains I had the lamb rump whilst Julien opted for the stuffed chicken breast.

We waited quite a while; it has to be said, whilst everyone else’s came out pretty promptly. However when they did arrive they were extremely tasty.

The Clink is described in the literature as the equivalent of a 5 star restaurant, however as much as I do appreciate the hard work and effort that goes into running it, it has to be said that unfortunately the closest comparison that can be drawn is the miniscule sizes of the portions. I’ve certainly seen that in swanky restaurants before. However the décor is rather laid back, with glass top tables, in a dark room, with brown seating, and understandably so; plastic cutlery.

I want to state here how much the inmates impressed me, as I realised my tone sounds negative. It was really pleasing to see a project being put on that gives these guys something to do and a goal. All too many times, people are quick to disregard and not appreciate people that have had to serve time, and they seem to all get tarred with the same apparent “ASBO” brush. However these guys were so lovely, attentive and really sweet. And although the portions were small, they were delicious and way better than anything I could achieve by a long shot. It’s important to remember these guys are working towards GNVQ’s and other qualifications, in order to better themselves when they get released; which is a fantastic thing for them to be aiming for.

We paid up (it came to around £55 for both, including drinks) using a chequebook as for obvious reasons cash is not allowed inside the prison, and walked back through a few gates and to the portacabin once more.

It was a great experience and a really wonderful project. Since The Clink has been running, there are statistics showing that the rates of re-offenses from people on the project have actually decreased, and that the ex inmates are going on to work within the hospitality industry, which is wonderful news.

Although the experience of waiting around and security checks is rather tedious, it’s a really good experience to have, that is totally different, and at the end of the day, you’re supporting a Charity that is making a worthwhile and noticeable difference. 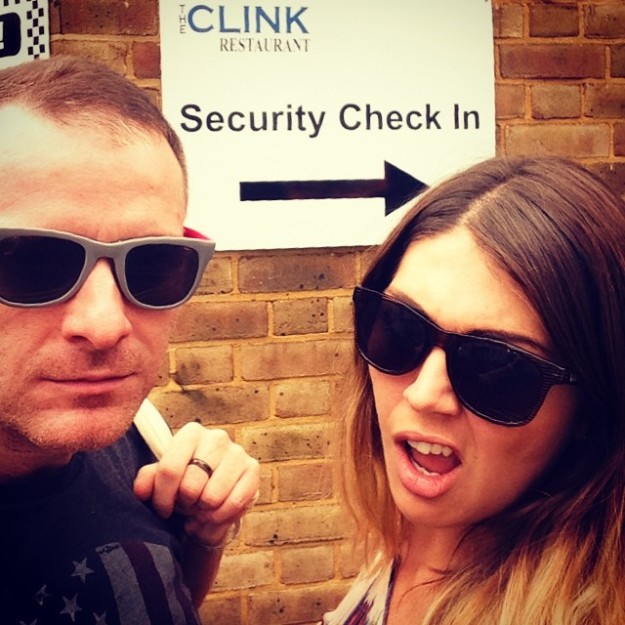 Unfortunately, the only photo we could take, and even got told off for this one.