I’d heard before leaving; that on the journey from Chiang Mai to Pai, there were over 700 winds and bends; as the town itself is situated in the mountains. This wasn’t a lie. I would usually go and back this with photos as proof, however I spent the whole time concentrating on not being sick, so didn’t manage to take any.

I got off the bus feeling nauseous, and rather un-fresh, however spent the evening writing my previous blog post and taking it easy.

I woke up the next day with the feeling of nausea in my chest and stomach still, so just quietly took a wander around town and then had a sleep. This was pretty much how I spent my first two days in Pai. On my third night I was feeling a lot fresher, and up to drinking and socialising.

The hostel I was staying at, Pai Circus School, was the perfect place to meet fellow travellers. I’d walked past many other guesthouses and hostels on my wanderings and not one of them seemed to have the same sociable vibe as this one did. The bar / reception area is all open, looking out onto the grass where there’s a tightrope, surrounded by people practising their hula hooping, fire throwing and juggling. If you’re not interested in the circus antics, there is a large seating area with music, and a pool table, where people sit and have drinks. 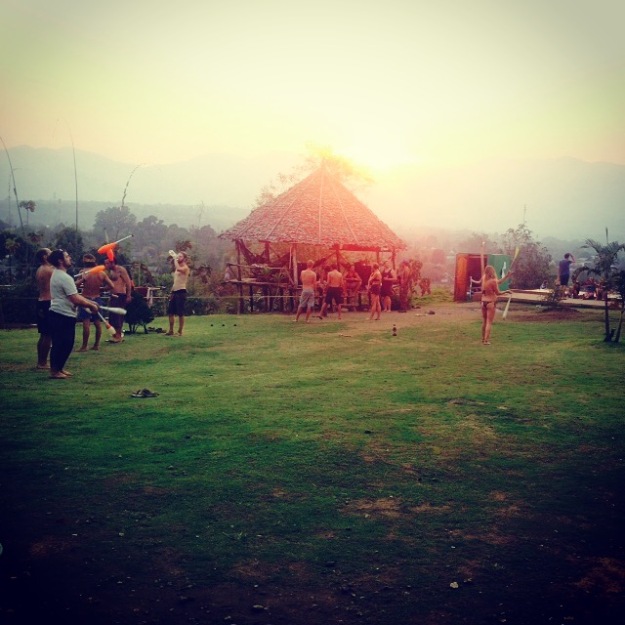 After getting talking to a few people from a variety of countries around the globe, mainly being the UK, the US and Australia, a group of us made our descent down the old dirt track, through the paddy fields, across an old bamboo bridge and to a quaint little live music venue called Edible Jazz. Groups of travellers gathered on bamboo elevated seating areas and drank cocktails whilst listening to a variety of musicians perform covers from your standard jazz music to artists such as Tracey Chapman. It was a really cool and chilled out vibe, and I sat there chatting away I felt flooded with the warm tingly feeling of total content-ness. I’d found a slice of paradise. Yes it was a town FULL of farang backpackers, but they were generally all the kind that were all there for the same reasons, and full of love and smiles. 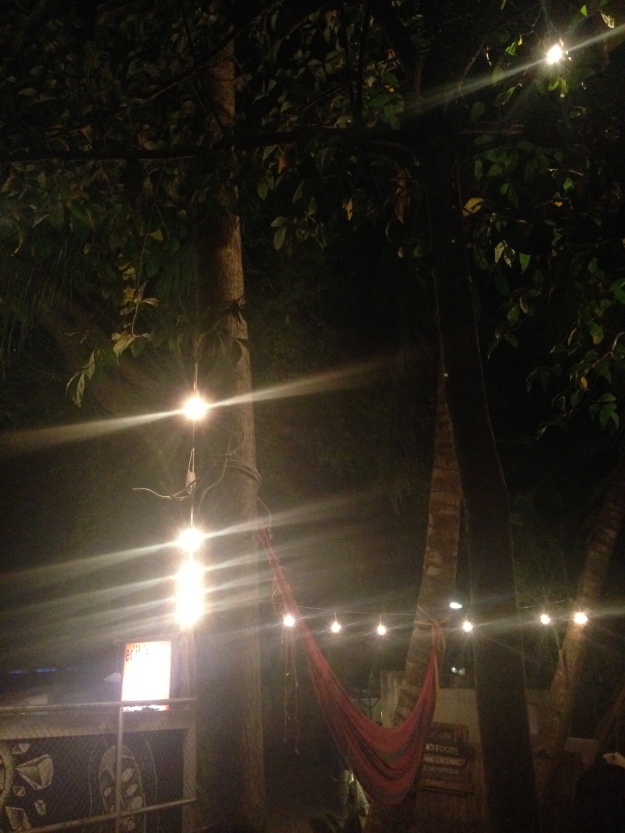 I saw a guy who I’d met in Chiang Mai the weekend just gone, so went to sit with him, and from there started talking to a guy and girl from England who I ended up sticking with for basically the rest of my time in Pai. What I love about travelling is that you are forced to shake all the inhibitions and insecurities, which you would hold on to when at home. I would never go and plonk myself down in a pub garden in London with random people without fear of being judged. Unless of course I’d been drinking far too much prosecco. Maybe we all should though, as it’s how you end up meeting the most loveable and awesome people.

We stayed out for a few hours longer and then we headed back to the little huts of our hostel and so to bed.

I’ll skip talking about the next day as I had clearly eaten something bad and was suffering with some pretty gnarly food poisoning.

The next morning I was feeling much better, and already it was my last day. A group of us all hired mopeds and we decided to go exploring. We got a map and noted some waterfalls and a canyon and sped off. Unfortunately, with it being dry season, the waterfall was totally dry. So we went up to the canyon instead.

We walked across a couple of the thin ridges, however at midday and having become very dehydrated due to yesterday’s food poisoning I started to feel a bit dizzy so chose to sit that one out. 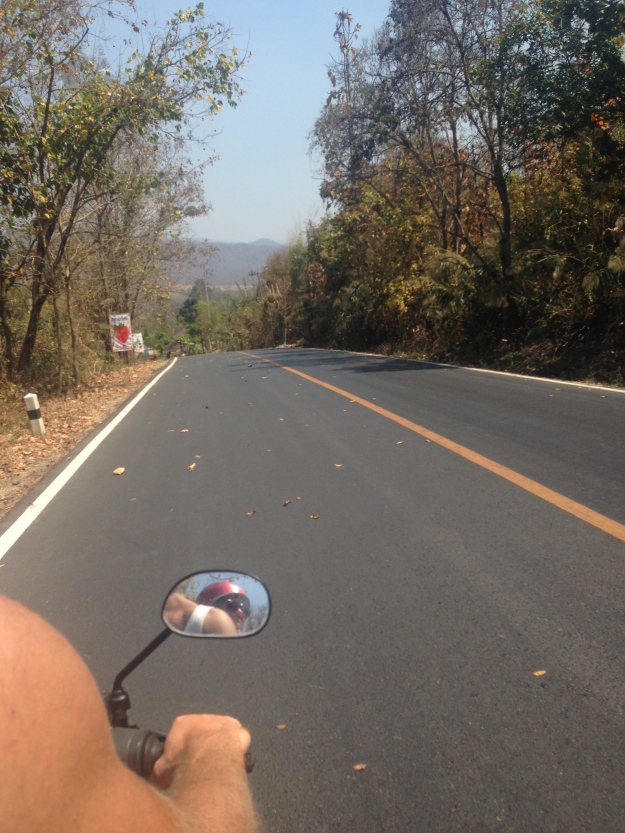 We went to a strawberry picking farm and had some strawberry shakes and sat in the sun. 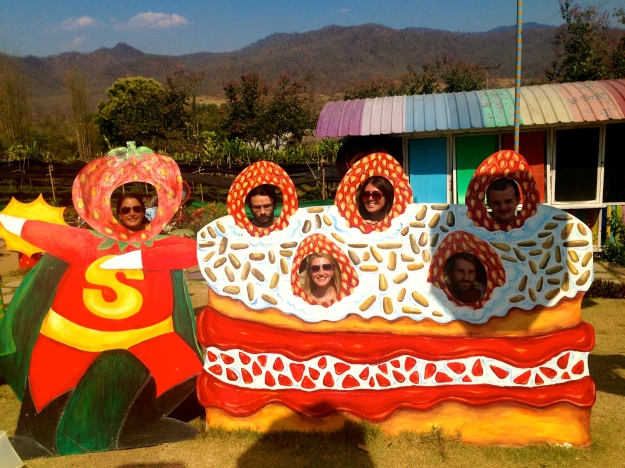 After this we seemed to have exhausted most the things highlighted around the town on this map. Sam and I decided to keep driving for a bit, having paid for a day’s rent of the bike, so just followed some small back roads in the countryside.

It was really pretty and nice to just drive aimlessly with the wind and bugs smacking in my face. 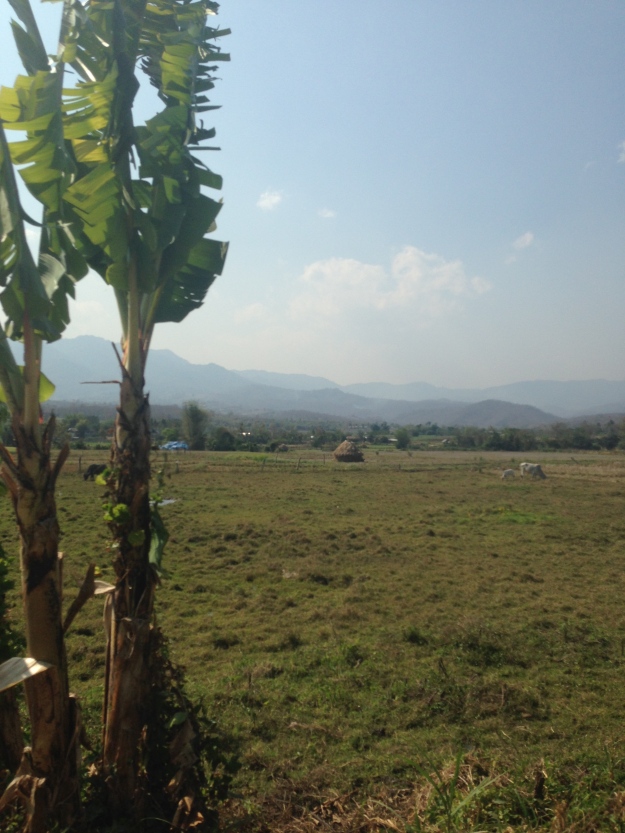 We stopped off at a small river, which had bamboo huts along the banks. We paid 60 baht and lay on our bellies as we fed the fish swimming downstream. What we thought would be a relatively boring activity turned out to be more fun when the fish turned out to be pretty aggressive and fought each other for the food. We shared a large Leo, sat and chatted in the sun a bit more and then made our way back to the hostel.

After a few drinks with a large group at the hostel, we made our way back to town, where we all got in trucks to take us to a full moon party. Thailand is renowned for its full moon parties, however that’s more down south; specifically Koh Phangan. This was by no means on the same scale, however we had fun, and it was where all the friends I’d made were. Some of the guys from the circus school had come down and were spinning fire, as a bunch of us looked on; madly impressed at how they can do that without setting themselves on fire. 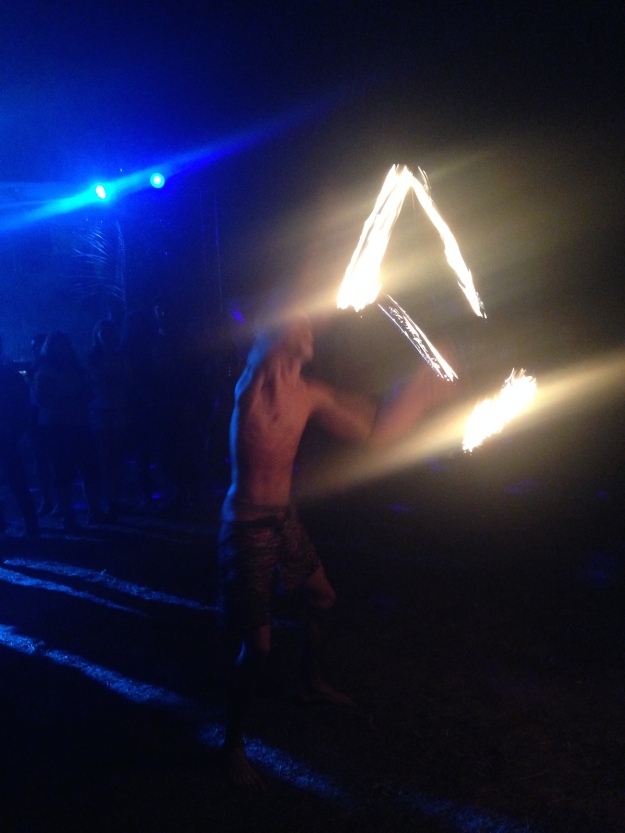 The next day was mine and Lucy’s last, so we spent the day by the pool with everyone, sunbathing and chatting about how much we’d fallen in love with Pai and didn’t want to leave. It’s such a cool little place, and although I didn’t really done much whilst there, it had a wonderful atmosphere and is a great place to meet a bunch of amazing and similar minded people. 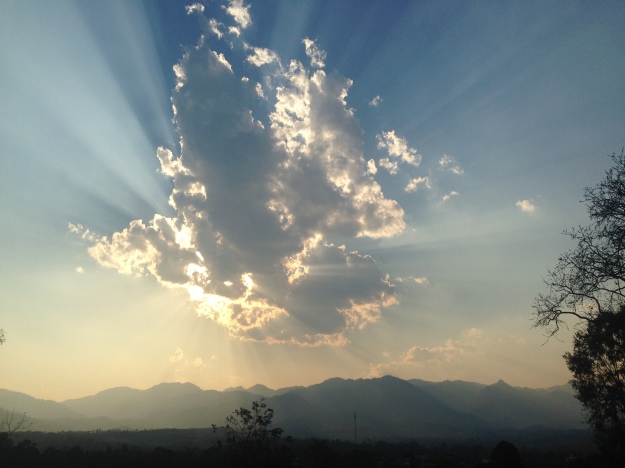 With heavy hearts we boarded the last bus back to Chiang Mai, and took the 700 turns to the city.

I felt so sad. I’d met such a great group of people; however I guess that’s the thing with traveling. Hopefully I will see some again when I get back to the UK.

I stayed in a cheap hotel, which was beautifully decorated downstairs, however it was seem by the time the decorators reached the floor I was on, that got tired and gave up. However it was somewhere clean and walking distance to the old town, so I took myself out for dinner to an amazing Burmese restaurant called The Swan, before walking back to my room to binge watch House of Cards and take it easy. 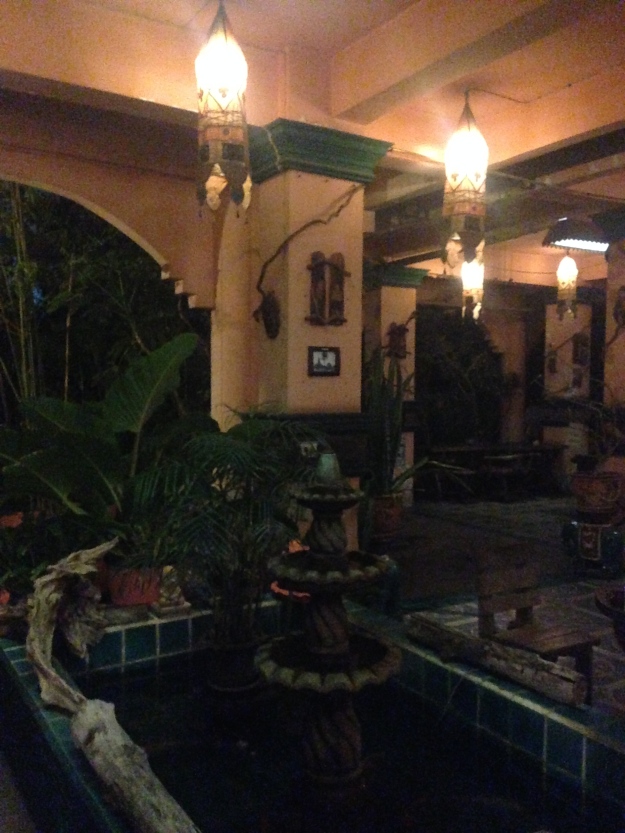 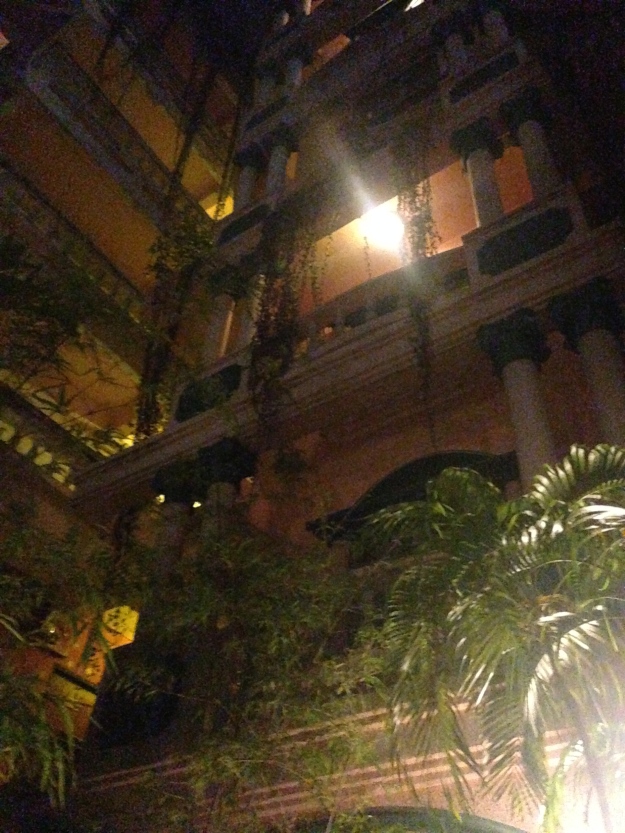 The next day I woke up in time to catch my flight to Bangkok; when I realised I was a day behind what I thought; as it occurred to me I would be spending not one but two nights in a crumby hotel next to the airport.

When I arrived I went for a walk around the area. There is nothing but a large food market for the locals living in the vicinity. The things I saw were even more stomach churning than at the food markets in Chiang Rai. 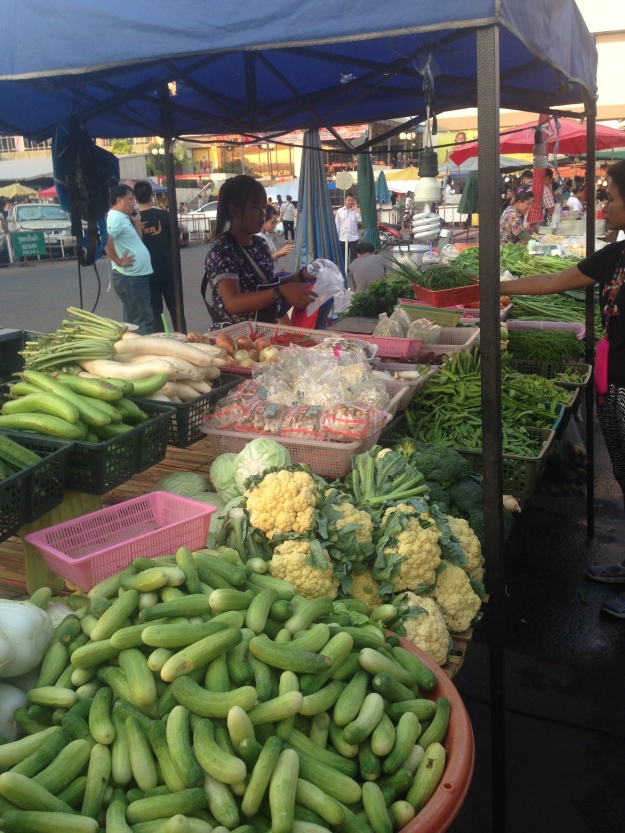 Apart from the standard worms and duck heads, this market also had some frogs, stomach up, with their entrails out and bound around their stiff bodies. All garnished with a fresh lettuce leaf obviously. 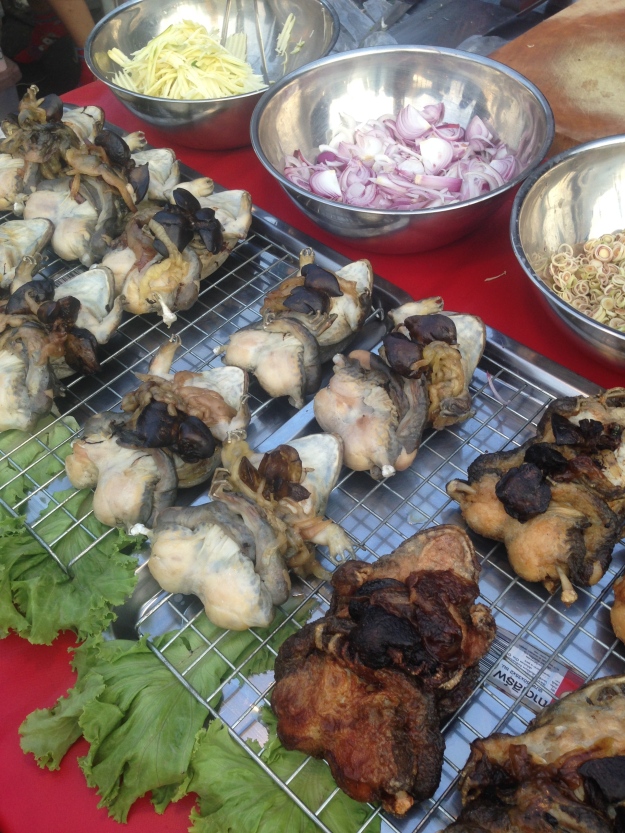 The sight of that churned my stomach, so I found a supermarket where I bought some cheese and wine, and retreated to my hotel room to once again binge on Netflix.

Today I have spent the day by the hotel pool, and unfortunately resigning myself to eat a fish burger from McDonalds, as I am pretty stuck for options here.

Tomorrow I end my solitary confinement as I fly to Bali to meet my very best buddy from school, who is now living in Australia. So that promises a few weeks of stupidity and fun before I say goodbye until I don’t know when. 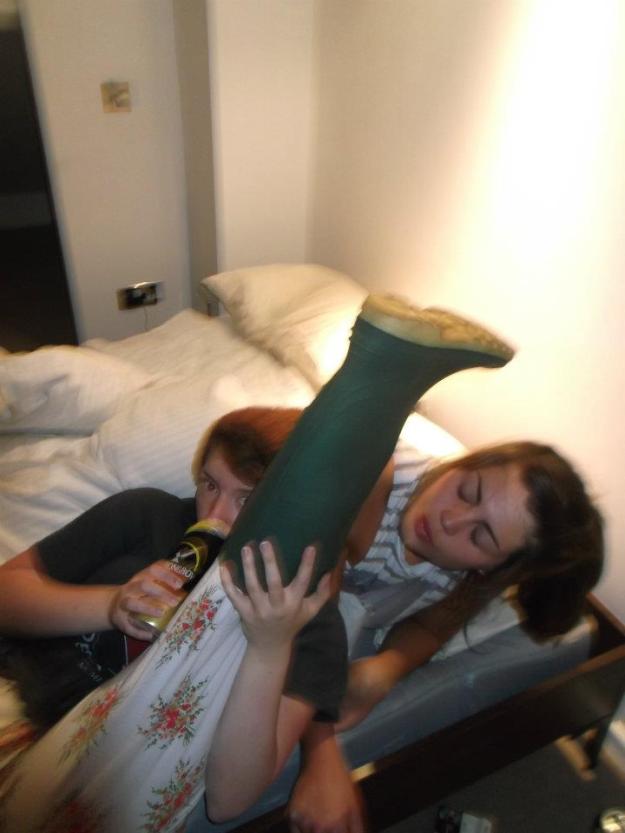 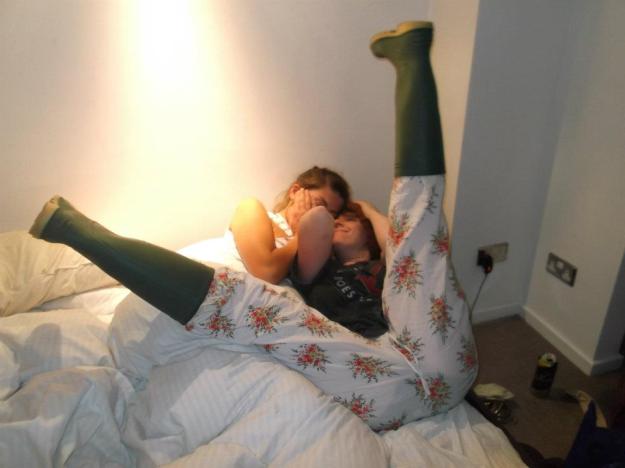 I shouldn’t really complain about this place; seeing as I have this massive white double bed all to myself; but I’m waaaaaay more excited about bunking up with my best mate; and spending some more weeks roughing it, the way I like it. 🙂