Unlike the previous day, where we had ventured into the city to enjoy our petit dejeuner, we decided to eat in our hotel. This was for two reasons, one of which was that we had a lot to fit into our day before we travel home later that evening, and the second reason being that time was more of the essence than ever, as we were going to Disneyland.

We wolfed down as many pain au chocolat and boiled eggs as we could without wanting to have a heart attack, packed up our belongings, left them with the hotel staff, and excitedly pranced down the street to the metro station once more to board the train from Montparnasse, changing at Nation and finally reaching our destination of Marne-la-Vallée.

We got there with perfect timing, just as the park opened at 10am. After exchanging the coupons (which Julien had purchased onboard the Eurostar) for tickets, we were through the gates and into the magical world of Disney. 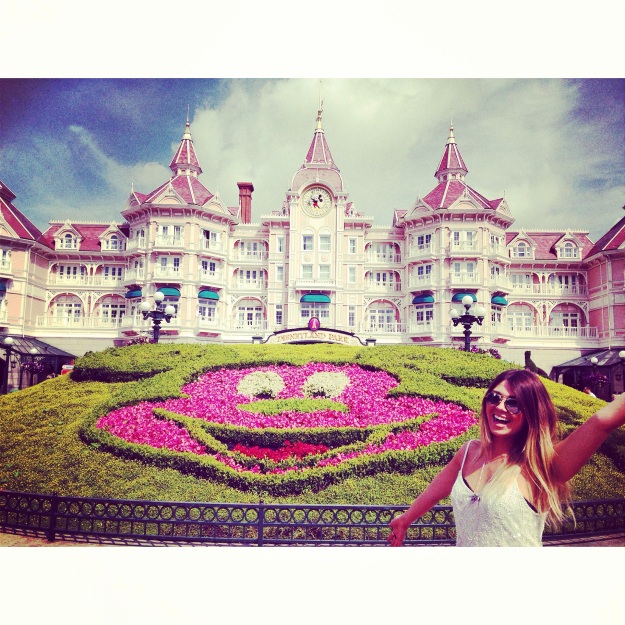 I haven’t been since I was a kid, and at the back of my mind thought to myself “am I too old for this?” however, the answer was definitely no. Yes, its obviously got strong pulls and links to the whole fantasy of childhood dreams and magic, however it’s great for adults alike. It hasn’t lost the magic, and it’s great fun to just shed all your adult woes and cares for a day, and just relive the magic of Disney I remembered from being a kid.

As we entered the grounds, we walked through the old style town, named Main Street USA, and took in all the quaint little shops that managed to cross the tackiness of Disney with turn of the century décor, surprisingly well.

I’m not a big fan of rollercoasters that are too big, as I’m a massive coward, and literally squeal whist riding something as tame as the Big Wheel at a fun fair. With this knowledge Julien suggested we walk up to Adventureland and start off with the Indiana Jones ride. After queuing for around 35 minutes, we were at the front of the line, and Julien was insisting we take a seat right at the front of the train.

It was petrifying. I screamed so hard I nearly lost my voice, and managed to hit my head on the safety bars that were strapped over my shoulders. I also managed to completely miss the fact we went upside down because I couldn’t open my eyes.

Its worth noting that if you are someone who goes to Thorpe Park or Alton Towers often, the Indiana Jones ride is in fact, not at all scary, however it is a lot of fun. I’m genuinely just an awful coward.

After this, we walked away, and I was buzzing with adrenaline. Ready to get on to all the rides, we excitedly got out the park map and started planning. However, what we didn’t take into account was the fact that the queues can be ridiculous. Some of the rides offered a Fast Track service, where you go and take a ticket, and return within half an hour, and can then use the fast queue. However, this is not available on all rides unfortunately, and we did end up spending a lot of time in lines, waiting around.

On top of this, some of the rides that we were hoping to go on were closed for maintenance, one of these being Space Mountain, which was very upsetting as that was the one ride that I really wanted try. This information may have been available somewhere on their website, however it wasn’t very clear and we were very disappointed not to get to experience it. 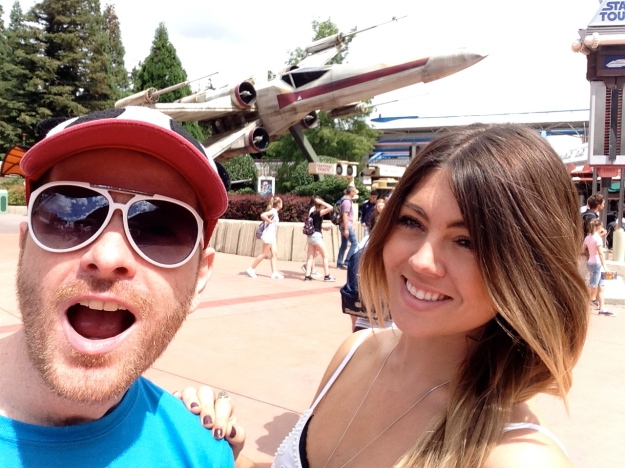 After posing for some pictures with the Star Wars X-Wing Fighter, we left Discoveryland to head back up to Adventureland. Here, we agreed to go on Pirates of the Caribbean, unfortunately nothing to do with the film franchise, however.

This was very fun and jovial, however although I’m a coward, I did feel like I could handle something a little more thrilling. Saying this, there was one tiny drop, and as you can see in the photo below, it still managed to make me scream like a little girl.

We then spent some time running around the Theme Park in general, climbing on the rope bridges, exploring caves and going in Davey Jone’s Locker.

Feeling braver, we made our way across to Frontierland, where we went on my favorite ride of all time; Big Thunder Mountain. We had our Fast Track tickets already, so only had to queue for around 15 minutes. We got on the ride, again sitting at the front, and literally had THE best time. It was enough to make me scream and a little nervous, but not that horrible feeling where I think I might spew all over the other theme park goers. 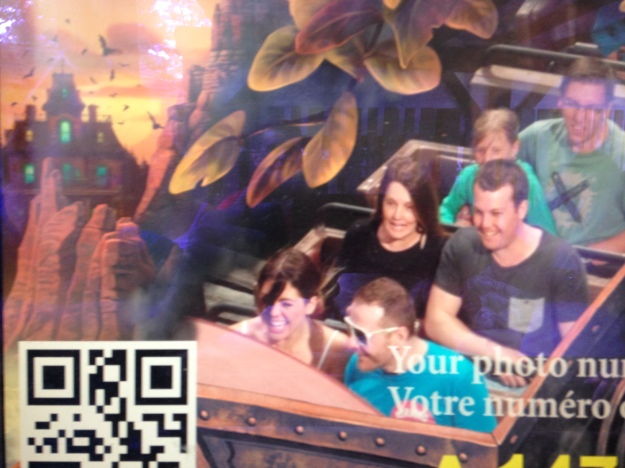 After this, we ran across and queued for 5 minutes at the Haunted House, which I remembered to be a lot scarier than it actually was at the age of 25. It was fun, nonetheless though, and quite clever with all the animatronics as you travel around in individual cars. 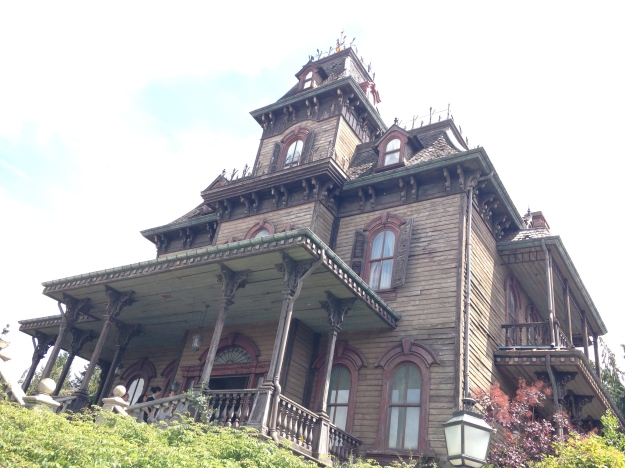 We then made our way across from the Disney Park, to the Walt Disney Studios Park, just across the street. Here we walked around, and saw some of the sights such as the Toy Story attraction, however agreed that we were short on time and couldn’t really go on any of the larger rides. Plus I may have been scared to go on the Aerosmith ride (yeah I don’t get the Disney connection either) as it sent you doing the loop the loop about a million times. 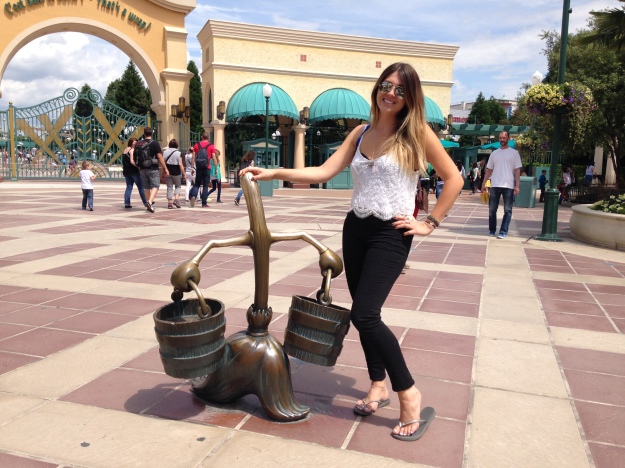 With that we returned to the Disney Park, where we grabbed some lunch, which unfortunately Disney do not do so well. The only options without queuing for a long time to go into a restaurant, were 3 variations of burgers and fries. I’m not entirely adverse to a burger; a good burger; however these were soggy and relatively nasty burgers.

After wolfing these down out of desperate need for energy, I decided I wanted a Coke, so randomly selected one from the vending machine.  I was overjoyed with the discovery of names you can get once you just hop across the Channel. 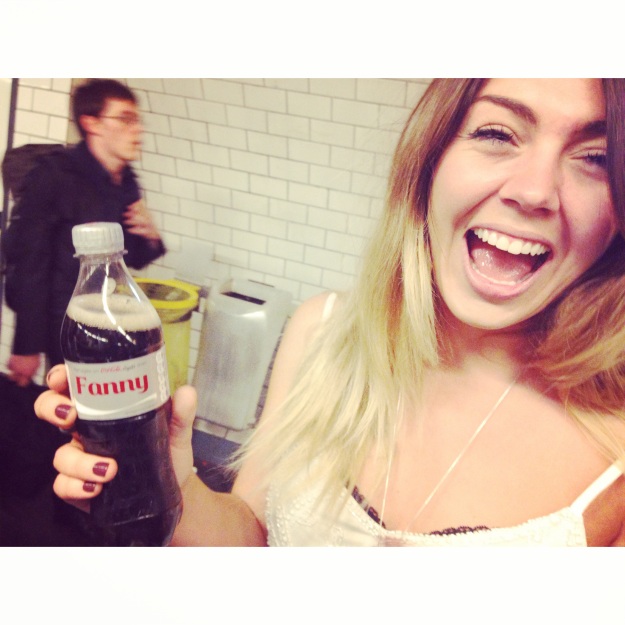 We agreed that we had time left for just one more ride, and then some gift shops, before we’d have to head back towards Montparnasse.

I let Julien decide which ride he’d like to go on, and for some reason I’m still not entirely sure of, he chose Autopoia. This is a ride which consists of ‘50’s style cars and you drive them repeatedly around a track. This ride is designed for very young children too, so obviously these aren’t real cars, and go around the track on a Scalextric kind of runner. Julien doesn’t drive, so I thought maybe he wanted a toned down version of the real thing, so agreed to do this with him.

It was good fun, and we definitely had a laugh whilst whizzing around 6 year olds with their dads, and probably just being annoying big kids, however it was very enjoyable.

We finished off with gift shopping, where Julien bought himself Star Wars related hats, and then bought me the biggest Thumper toy in the entire shop which obviously went down very well. 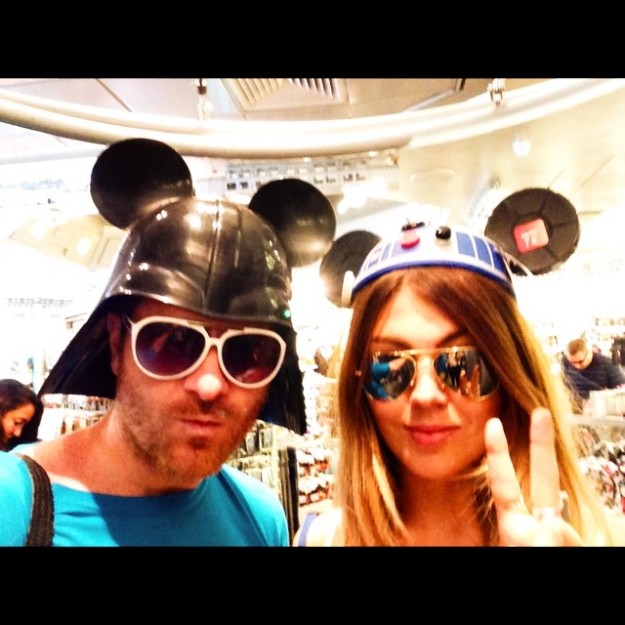 We made the long journey back to the hotel, feeling absolutely exhausted, and having to both take a nap on the metro. We certainly had so much fun but we were positive we needed longer there, as we only got to experience a handful of rides and certainly would have been able to have more fun, not having to pick and choose our rides nor having to time them the way we did. 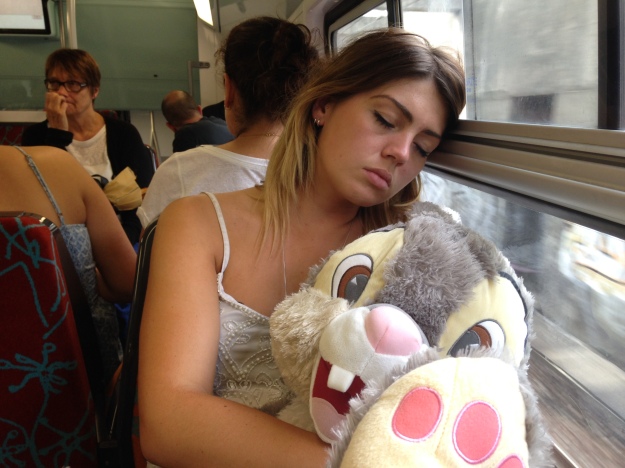 After picking up our bags from the hotel, we got back on the train to Gare Du Nord to catch the Eurostar. In just a couple of hours, we were back in London, exhausted but content, dragging our suitcases and all our new souvenirs back along the platform, to the tube, and so to bed.