I spent my first night at La Ruka having an early one.  There were plenty of people socialising outside my room, which was a shared, eight person dormitory; however I was tired from travel and needed the rest. 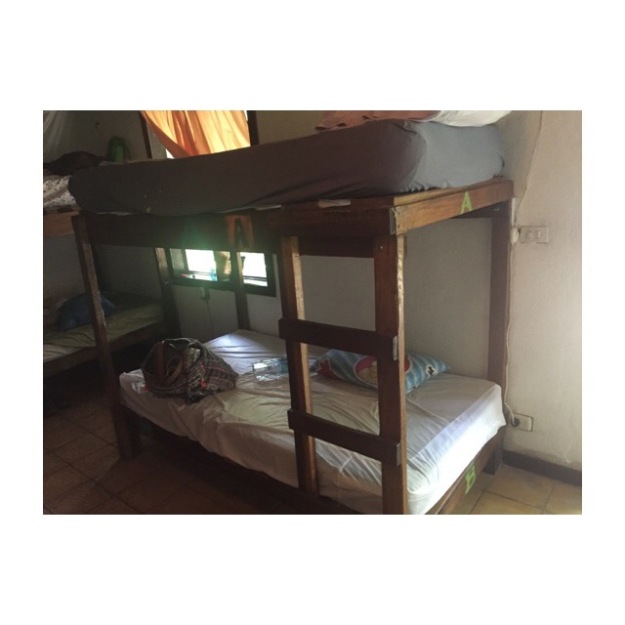 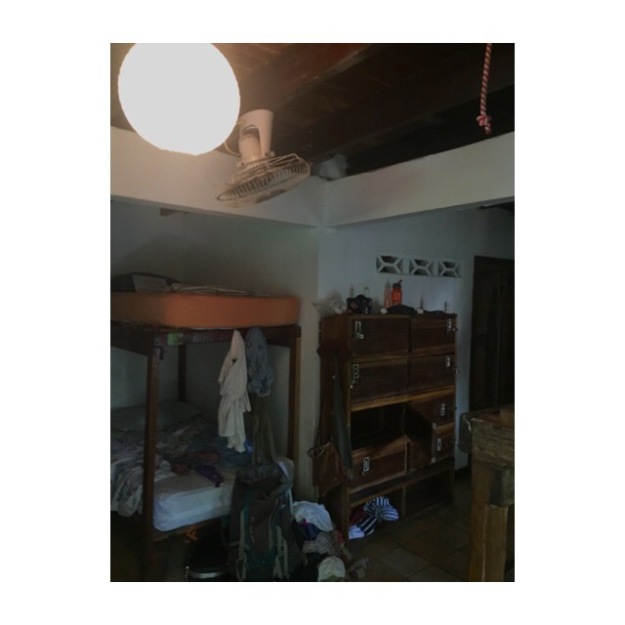 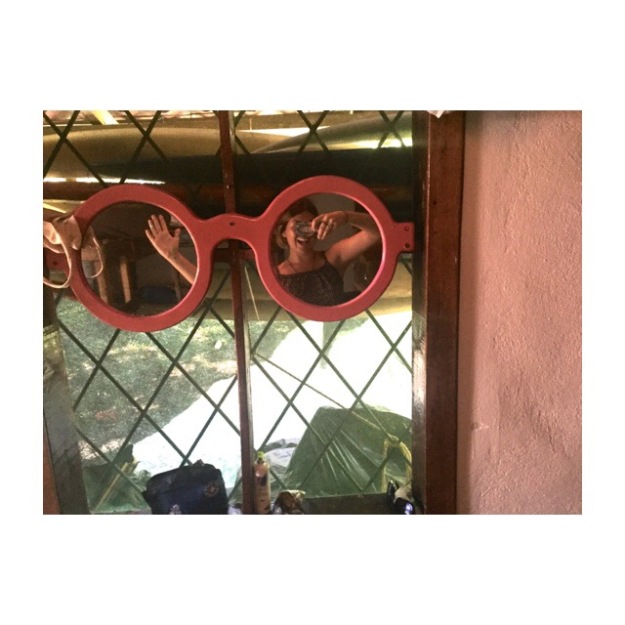 And I’m glad I did this as I was up early the next morning for a Vinyasa Flow yoga class with the most charmingly crazy and insane woman I’ve ever had the pleasure of meeting.  She had the class howling during Downward Dog, and gribbitting during Frog Pose.  At first I was a little embarrassed, but soon enough I was laughing at what a fun filled class it was, with less hippie rubbish and more emphasis on having fun whilst stretching into hugely uncomfortable positions. 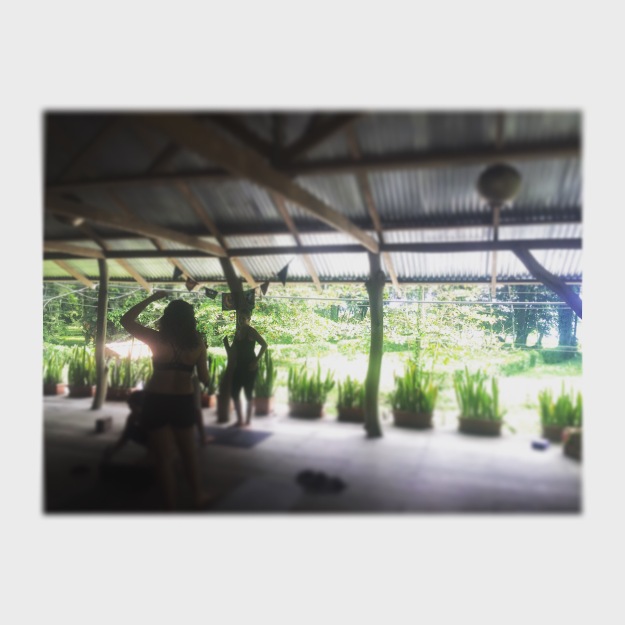 I started this lesson thinking I wasn’t a particularly sweaty person, but finishing it absolutely sodden. 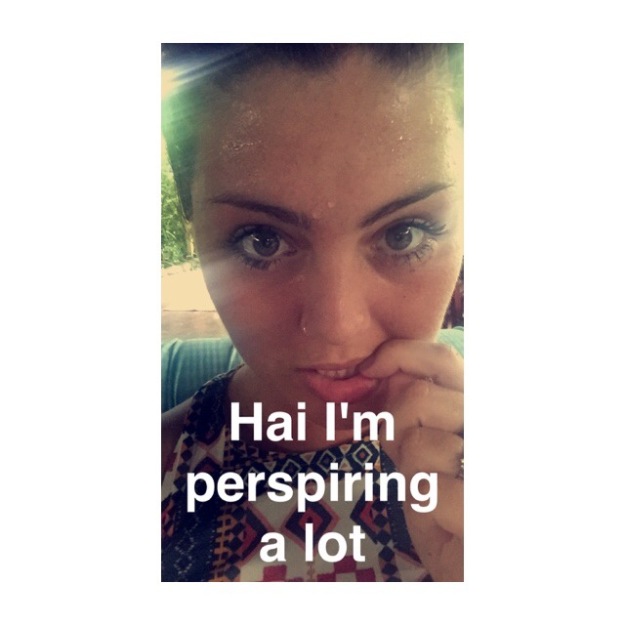 I then enjoyed a platter of fruit for breakfast, and strong coffee, before starting my shift at La Ruka, which consisted of working the front desk for five hours, whilst getting to read my book and listen to my music.  It really wasn’t anything remotely like hard work which was nice. 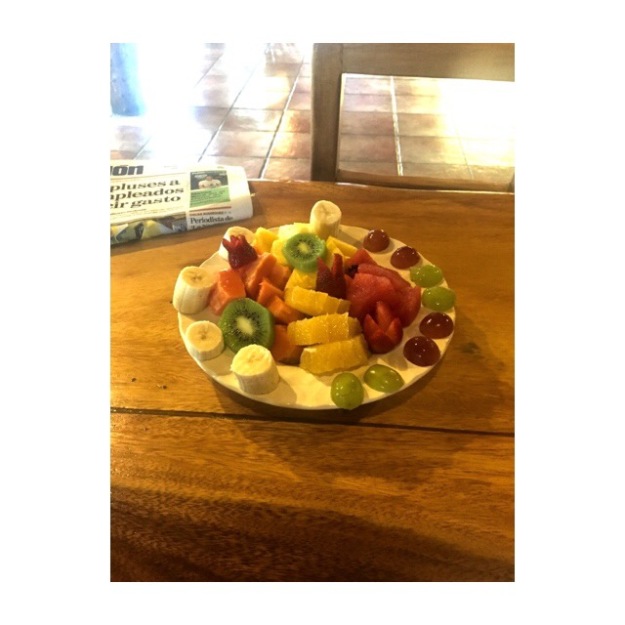 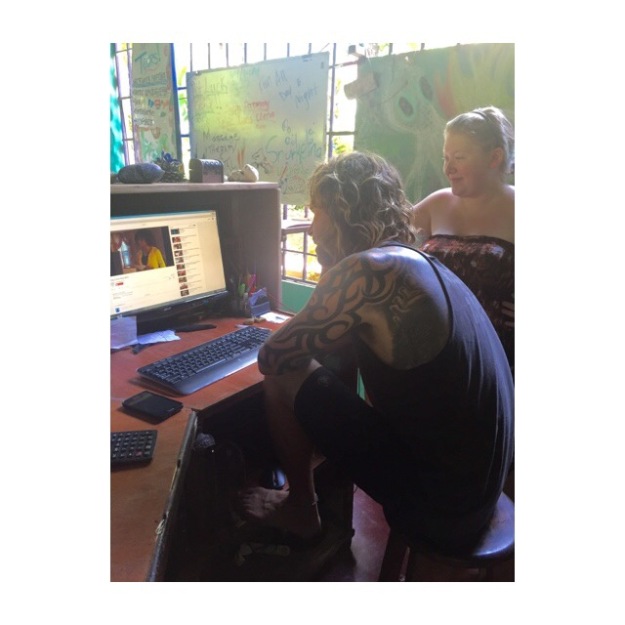 After this I got my chance to be sociable, and had drinks with some of the other guests at the hostel, before hitting a club down the road called Tasty Waves.

This was the night I first started to wonder if this was really a place I wanted to be.  Yes, it’s beautiful, yes I’m in paradise, however, the feeling of constant unease was really grinding on me quite relentlessly.

I almost feel weak saying this, as I know I’ve travelled around the world many times, and many of those times have been alone, however, I didn’t feel safe there.  Everyone plays it down and simply says “well don’t go out at night on your own”, however those same people are telling me stories of either themselves or friends who have been mugged at gunpoint, threatened with a machete or even worse; gang raped.

I also know that these awful things happen all over the world, and very much so in places I’ve lived such as London and Los Angeles, however, these cities are huge and Puerto Viejo is tiny, with a high rate of such things.  It is still a very appealing place to live, full of lovely people, and many do spend their time living there with absolutely no troubles, however I don’t like being told what to do, and that includes not being allowed to leave a club when I want to go to bed, because it’s too dangerous for me to walk home 1 mile on my own.

It’s even a reason why this blog has far less photos than I wanted, as whilst I was there a lovely American man I met called Gary, got his camera and all his photos stolen whilst he had his back turned, and I’d hate to get mine stolen too.

Walking back from the yoga one day along the beach trail, which is surrounded by thick trees, I saw a machete just laying at the base of a tree, somewhat hidden from clear view.  It’s very plausible that this was just belonging to a worker, as they use these to cut back the grass, however seeing this, and then looking up to see a man walking towards me holding another one, I was quick to find my way back on to the main road.

It is paradise and full of so many beautiful people, however I began to increasingly think; I want to be somewhere I can go for a nighttime stroll with my boyfriend, if he were to visit, having had a few drinks, without the feeling I may get jumped and have a Demi Moore situation on my hands, like in the movie, Ghost.

Saying all this, the day time feels more than safe around the town.  It’s small and has a few shops set up, mainly by expats, and has a very arty and bohemian feel about it. 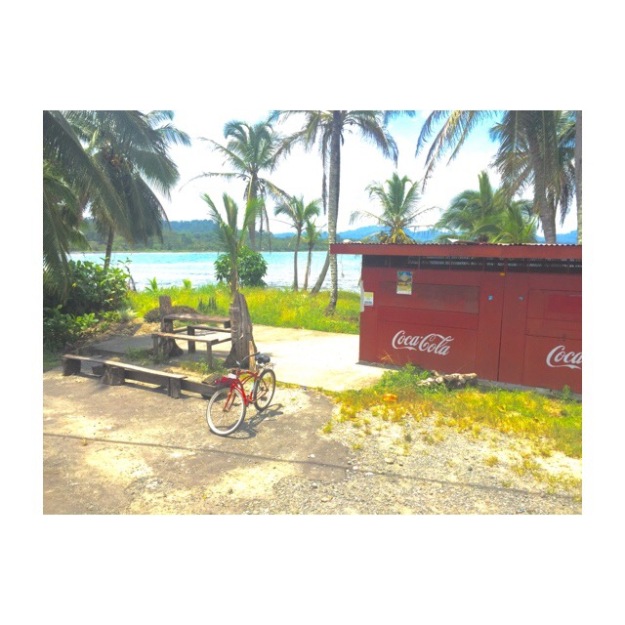 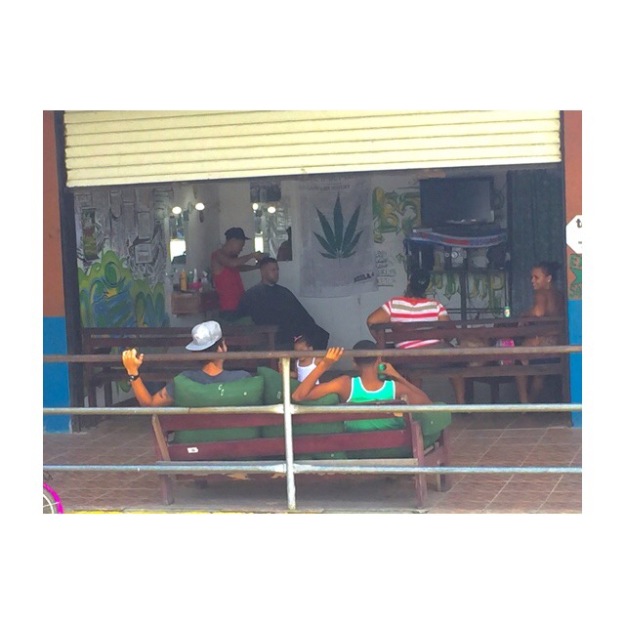 I continued to do yoga every day, and tried to keep drinking to a minimum, and started to feel better almost instantly.  My routine would be to get up around 7.30AM, and use the internet for 45 minutes before heading to my 75 minutes yoga class.  After this I’d come back and have a small breakfast, before heading to the beach for a couple of hours, where I’d swim in the beautiful Caribbean Sea, and laze in the sun whilst reading my book.  I’d then either enjoy the rest of the day with other hostel guests or be doing a shift at La Ruka. 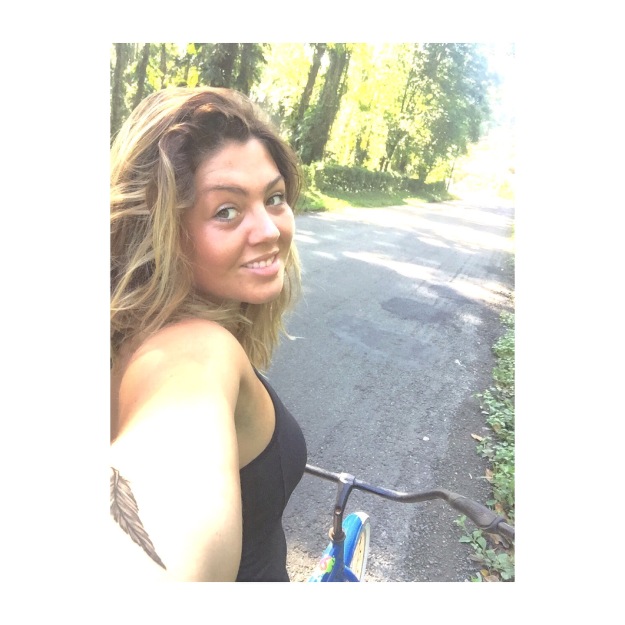 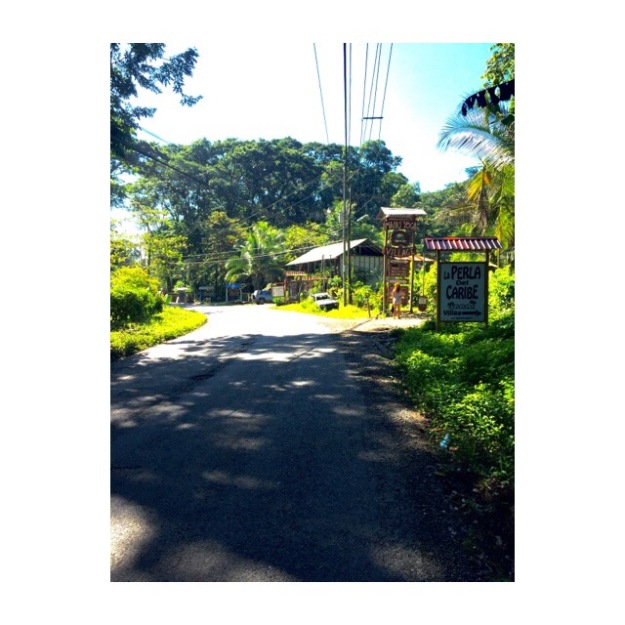 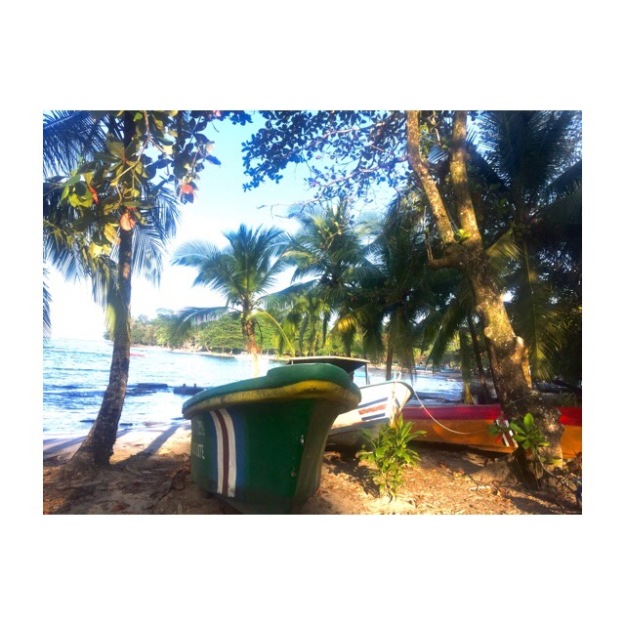 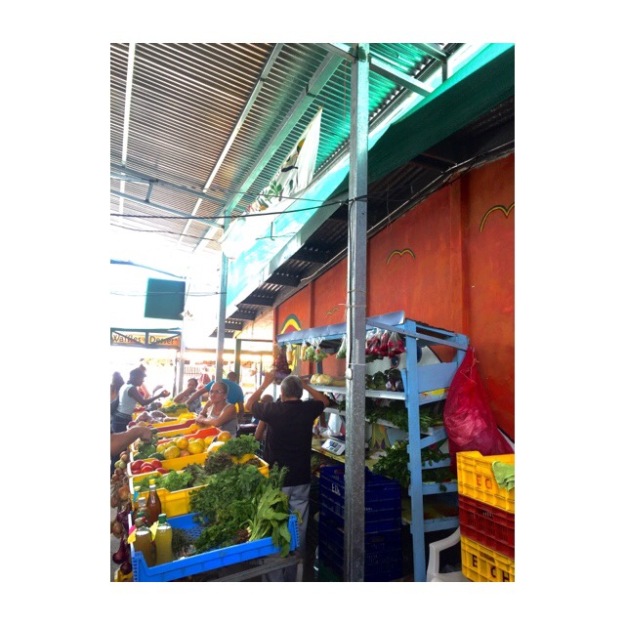 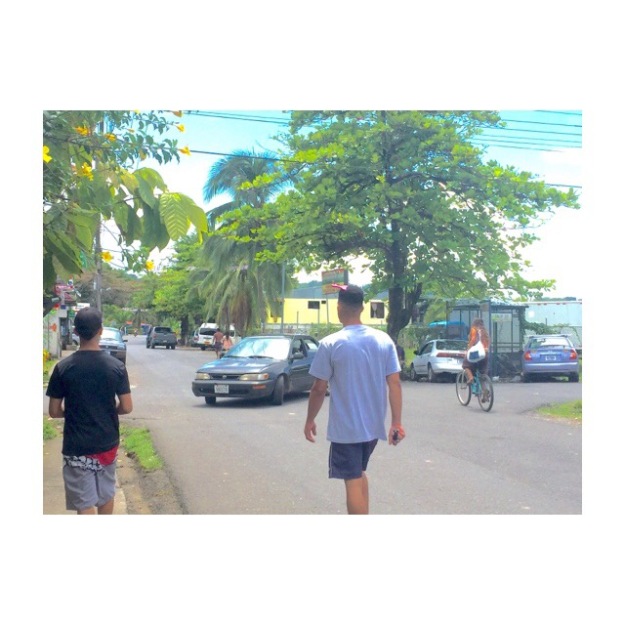 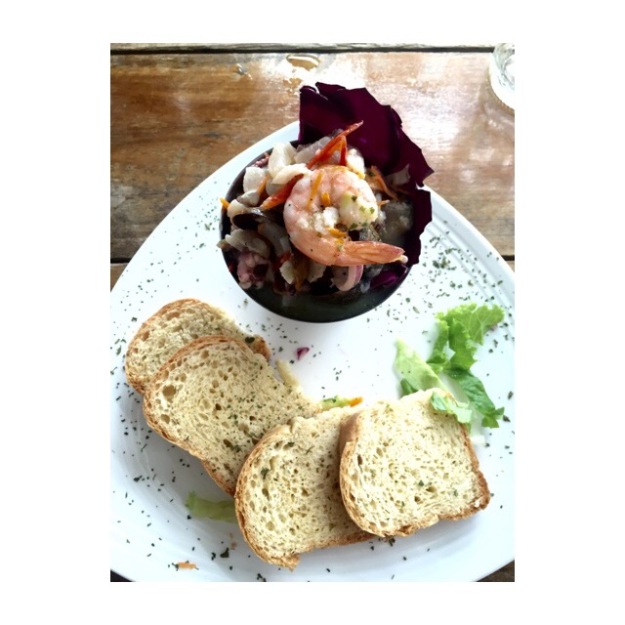 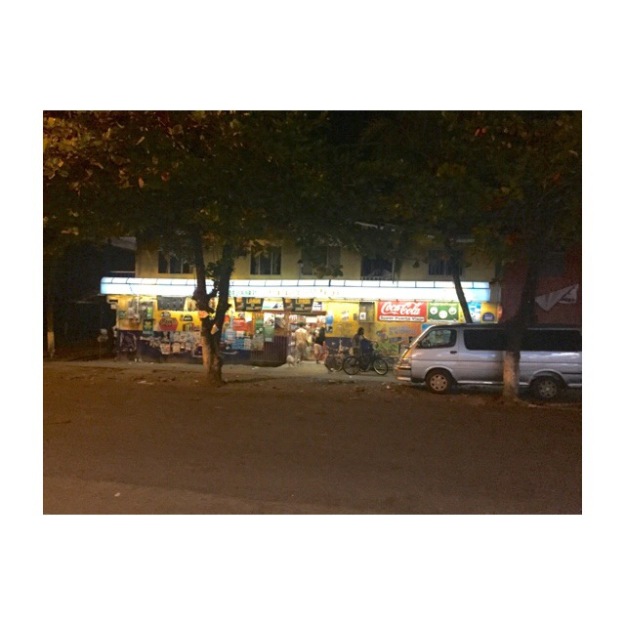 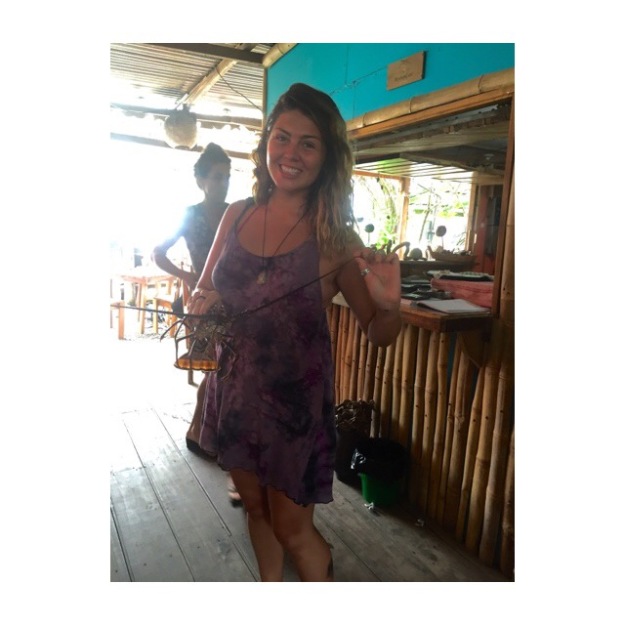 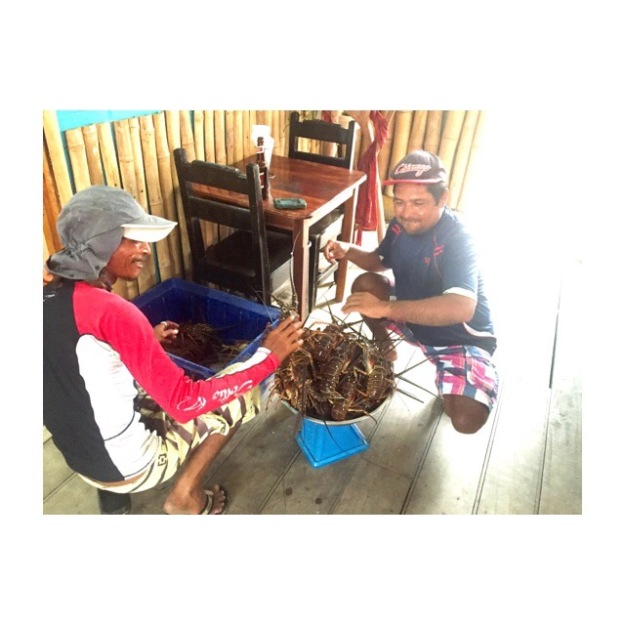 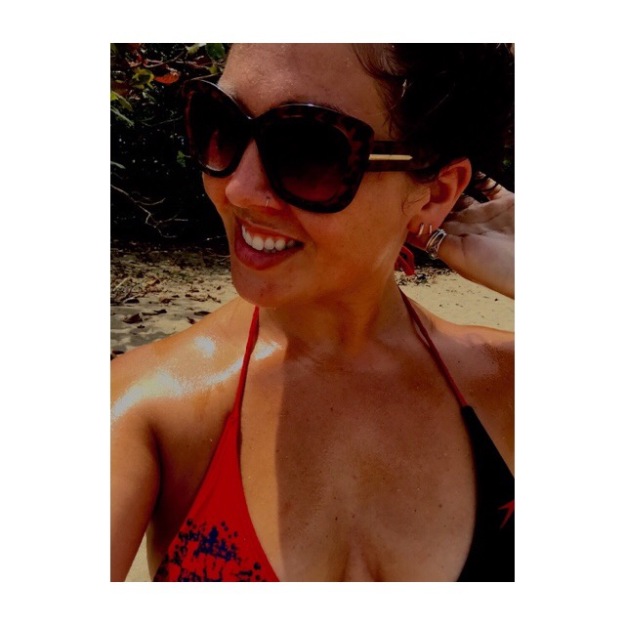 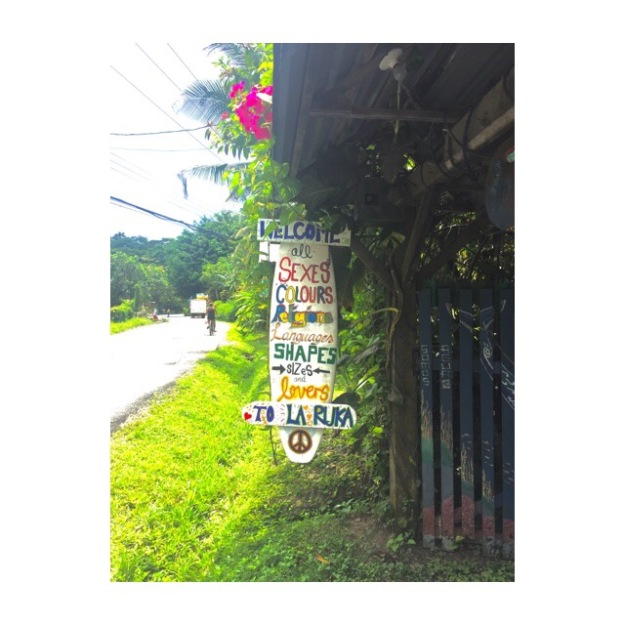 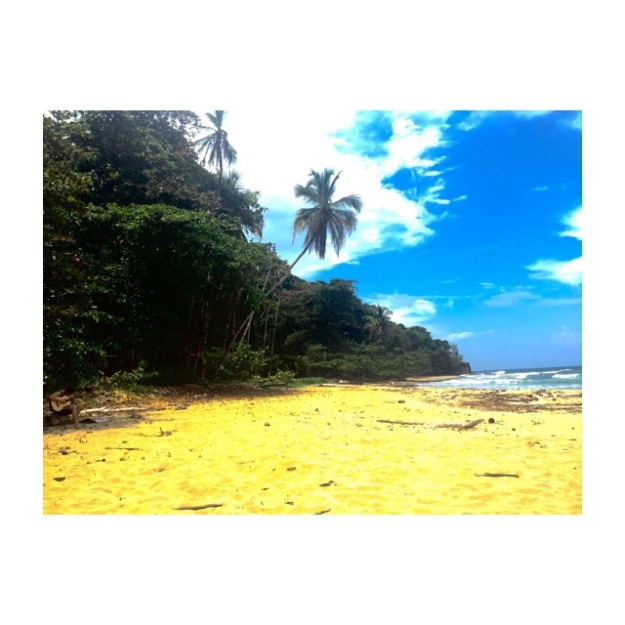 Apart from that underlying feeling of lack of safety at night, everything was perfect.  The owners, Dannie and Dave were awesome, and made the hostel feel like a big home.  We had a great set of volunteers working there, Audrey and Charlie, both from the USA, Cocie from France, and the amazing Kato from Guatemala, as well as a bunch of really nice guests coming and going.  Living with these guys was awesome, and every night was filled with laughs as we sat in the smoking shelter, Kato playing the drums and Cocie trying really hard to roll the perfect joint, and when succeeding, rewarding himself with croissants from the bakery up the road. 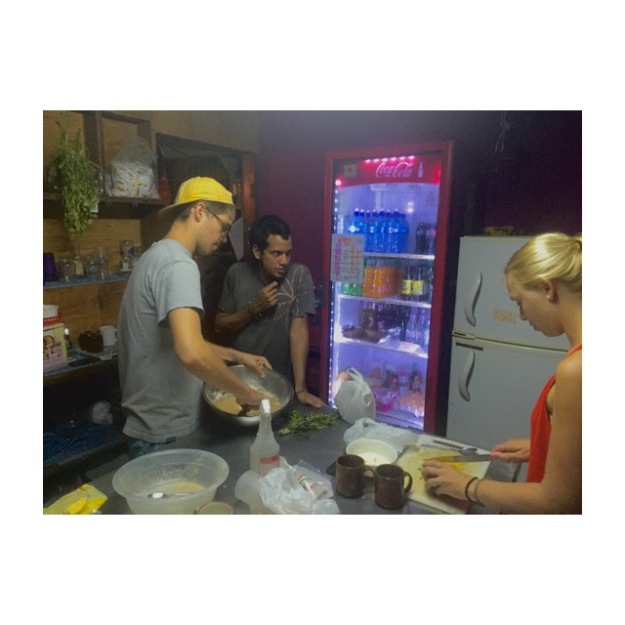 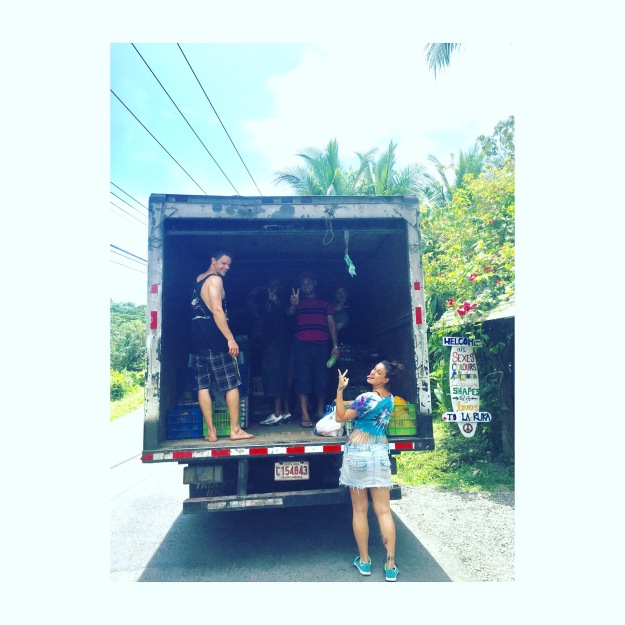 Unfortunately there was one older woman there who seemed to be a little bitter about life, or something she was unhappy with herself regarding, and would always make negative comments and not greet people with a smile.  It’s odd how people seem to think just because they live the lifestyle of dropping everything and traveling, getting one dreadlock and preaching about Bob Marley makes them a peace loving Rasta; however, all they’re doing is belittling people and making other feel small.  The behavior of this individual was recognised by others too, so at least I knew it wasn’t my own self doubt or paranoia. 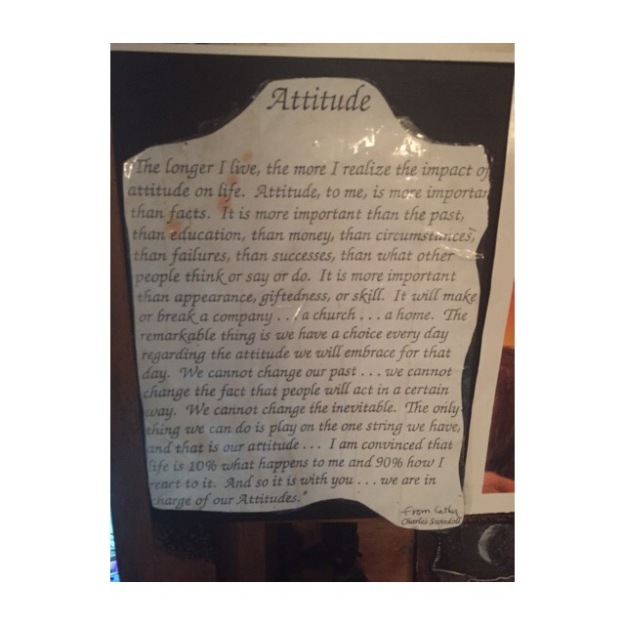 This, combined with the safety aspect resulted in me making the decision to leave Puerto Viejo.  If I look at this, I certainly could have stayed; the negative individual didn’t impact my life THAT greatly, however, there was a feeling in my gut that told me there was another part to my journey that I need to take.

I had a fantastic time at La Ruka, and would recommend that hostel time and time again to anyone visiting the area.  I only spent just over a week there, however, it’s changed me already.  The rash I had on my face caused by stress has just disappeared, I’ve lost weight, I’ve eaten nothing but fresh produce (well almost nothing but) and met people who have changed my outlook and put me on a positive spin.  I’ve learnt so much from Dannie, even though she probably doesn’t realise how much she influenced me in such a positive way, and Kato taught me so much about what it is to love the people around you. 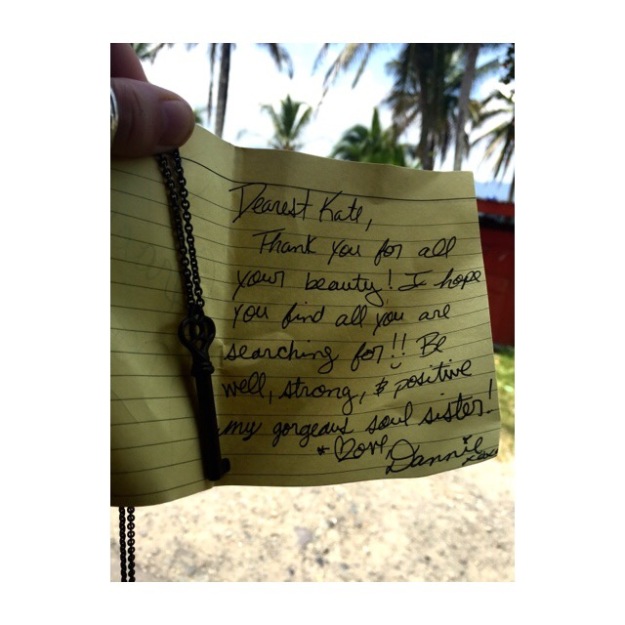 I loved playing with all the animals at the hostel, and checking out the amazing wildlife surrounding the area.  I would love to go back, and if Central America is ever on the cards again after this trip, I’ll be sure to make a visit. 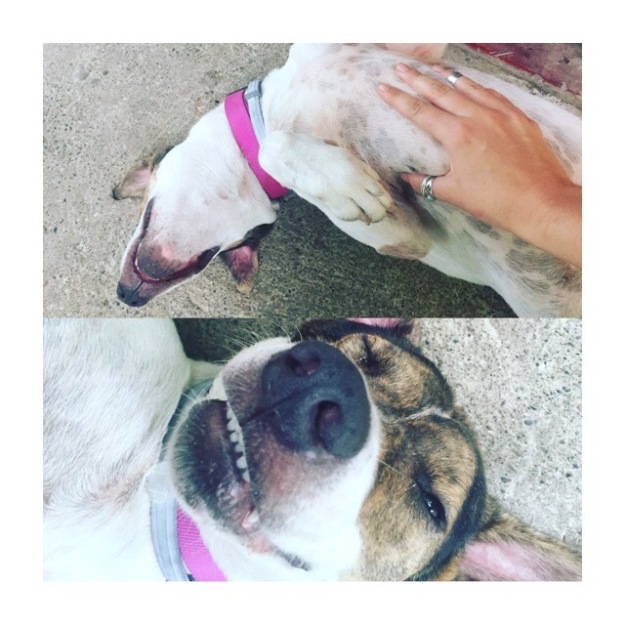 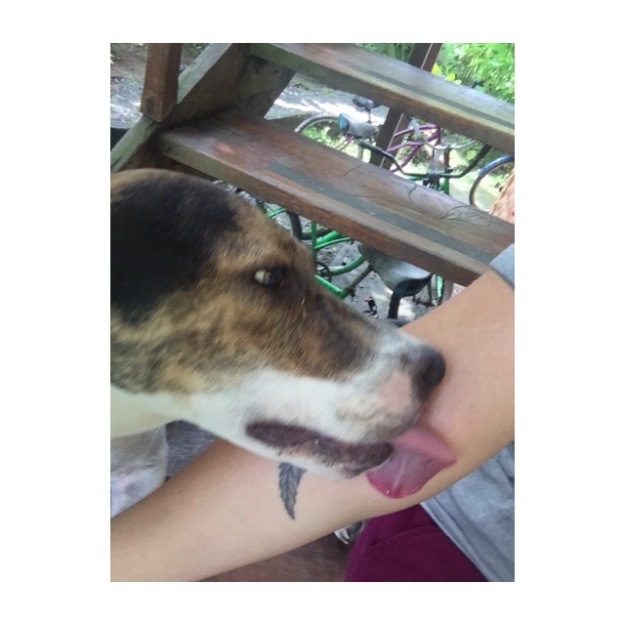 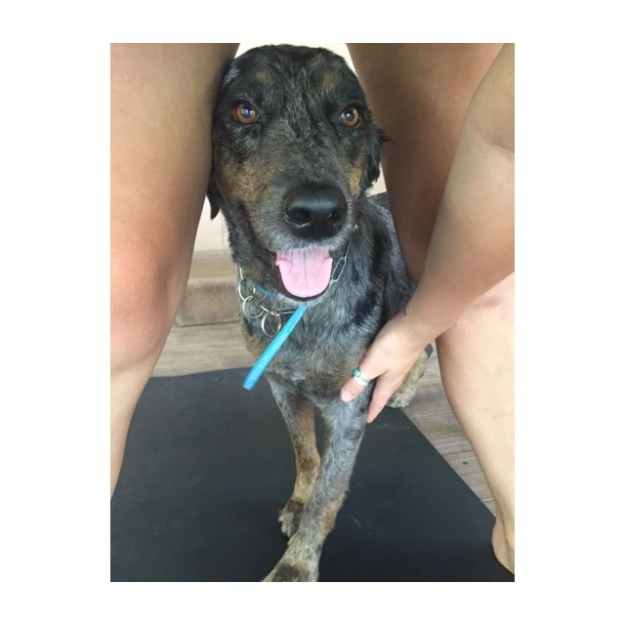 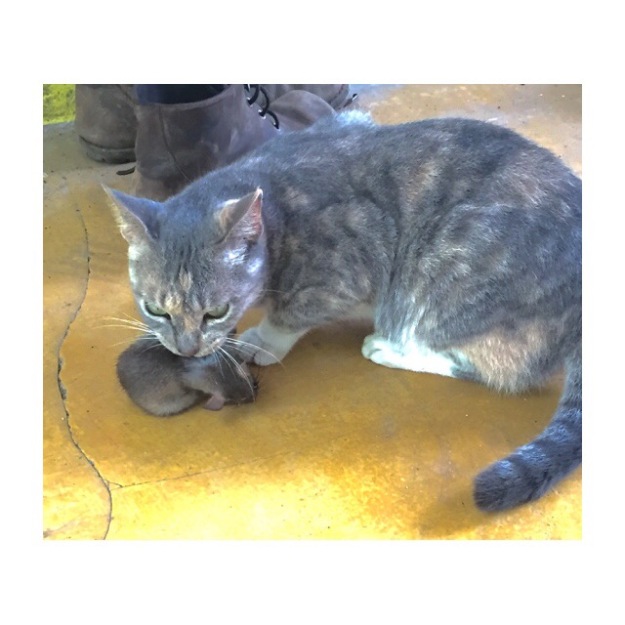 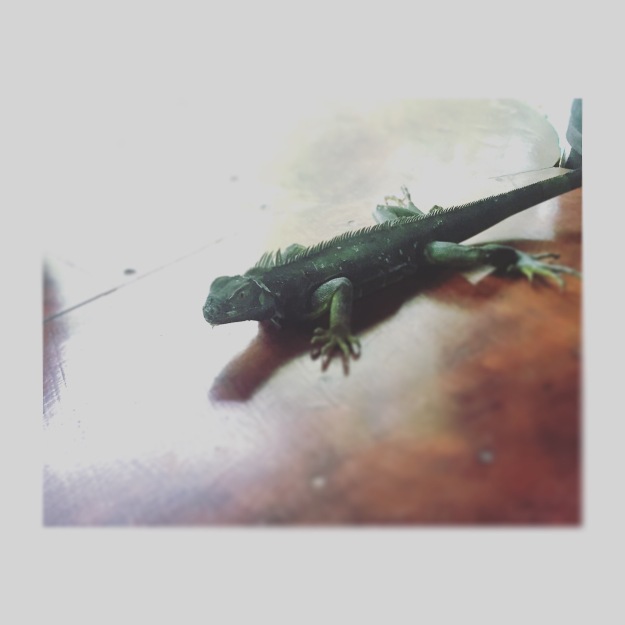 However, the next chapter is Nicaragua, where I’m off to tomorrow to live as part of a Conscious Living, Yogic Community, two miles from San Juan del Sur.  Here I will be studying yoga and attending other workshops daily, whilst volunteering with building work and gardening surrounding the property, as well as helping to look after two twin babies.  In return I get to communally cook vegan food, and live in an environment where smoking and drinking is forbidden.  If you know me, you’re probably reading this bit and laughing – Hell I would too, however the people that I’ve met in Puerto Viejo have made such an impact on me with their refreshing ways, I’d like to give learning about myself in depth a try too.

If anyone needs me, I’ll be here: http://www.nomadicyogaschool.org/

I’ll let you know how I get on.